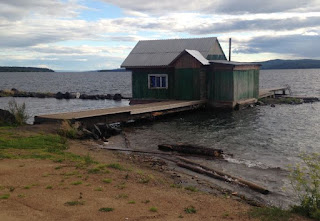 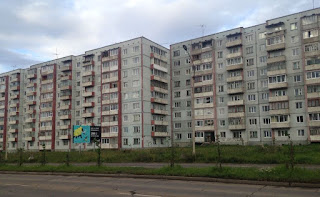 Pearl Harbor, Hawaii: A Civilian "Lost" in the Pacific - August 2016 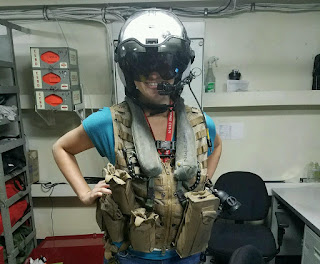 Compared to some of my friends (specifically Kimberly Leupo), you could definitely call me a timid traveler. Other than Jamaica, I’ve limited my travels to the States and our great neighbor to north, Canada. And while I may not have found myself lost in any foreign countries on my most recent vacation, I did get the chance to get lost on an aircraft carrier in the middle of the Pacific. It was definitely a once in a lifetime experience, and I think the trip qualifies me as a Girl Lost in the World.

Unless you’re a member of the U.S. Military, specifically the Navy, chances are slim you’ll ever have the opportunity to board and sail an aircraft carrier. Sure you could tour one of the many decommissioned carriers that are open to the public, like the U.S.S. Midway in San Diego, CA, or the U.S.S. Yorktown in Charleston, S.C., but trust me when I say it doesn’t compare to living a week on a boat, in a stateroom with two roommates, surrounded by planes, helicopters and thousands of active duty members of the military. 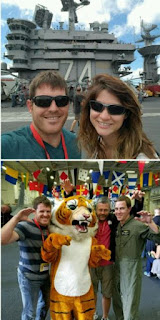 So how did I get the chance to jump onboard? It’s called a Tiger Cruise – a chance for family and friends of active duty service members to see up close what life is like onboard a ship during deployment. My ship/boat was the U.S.S. John C. Stennis and I was a guest of my fiancé’s brother – a helicopter pilot based out of San Diego. My fiancé and his father were also on the cruise.

We were heading from Pearl Harbor, Hawaii to San Diego, and were ready for a once in a lifetime experience. So what’s life like for five days on a boat with 5,500 people? Here are some of the highlights…

Living. I’m going to break this section up into key terms… 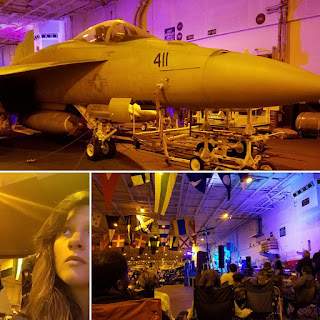 How do you stay entertained for six nights on a boat? Concerts and movies of course. Each night the hangar turned into plane storage/a concert venue/movie theatre. It was a great way to pass the time and especially fun when sailors were invited on stage to sing, play drums, guitar, etc.

While we weren’t hanging in the hangar bay (see what I did there?), I was excited to find televisions on the ship. Unfortunately, I’m the kind of person that can’t live without television. Luckily for me, the televisions had four channels – two of them basically devoted to the Olympics in Rio. There’s nothing better than cheering on America, while floating on an American ship, with some of the country’s bravest. Go America! 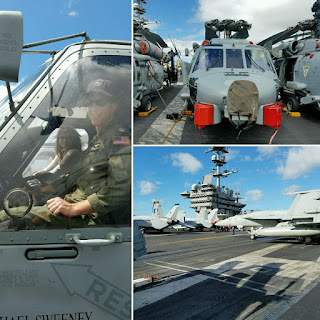 Pearl Harbor – I visited Pearl Harbor and the U.S.S. Arizona Memorial last time I was in Hawaii. If you haven’t been to Pearl, it’s something every American should do at least once in their lifetime. As you can imagine, it’s a different experience when you’re on a naval vessel – getting underway from the pier and transiting out from Pearl Harbor to the sea. Everyone gathered on the flight deck as a guide took to the P.A. system to tell us the story of the attack on Pearl Harbor, complete with stories behind various towers, ships, and other landmarks. As we left Pearl Harbor we passed battleship row, along with the U.S.S. Arizona Memorial and nearby U.S.S. Missouri. We passed Ford Island on one side and the majority of ships moored in the present day naval station, many of them ships of foreign navies stopping off in Pearl before their long voyage home following the completion of the international war games, known as RIMPAC, just a couple days prior. We passed naval drydocks, some colorfully cursed by history, Hickam Field, home of the Air Force’s most advanced jet fighter the F-22 Raptor, and Honolulu International Airport before exiting into the open ocean.

The Airshow – By day three of the trip the skies and seas were clear and the pilots and their aircraft were ready to take to the air. The Stennis carried four distinct aircraft; two variants of the F-18, the Super Hornet and the Growler, one specializing in air superiority/ground attack, the other in targeting enemy radar stations. The second was the E-2 Hawkeye, with its giant rotating radar dome, serving as the carrier’s eyes high in the sky. The third, the Hawkeye’s bigger brother, the C-2 Greyhound, was charged with delivering personnel, supplies and mail to the ship. Finally, there was the MH-60 Seahawk helicopter – the rotary winged workhorses of the fleet.

They all took to the sky for an aerial demonstration, at first passing one by one as the show’s narrator explained the role and mission of each. Some took turns firing their guns into the distance, shooting rockets into the sea and launching flares, while others flew by the ship in tight formation at low altitude and high speed. Watching everything land on the flight deck was a show of its own – betting whether or not a plane would catch the first, second, third or fourth arresting wire (they’re what keep the planes from falling off the end of the deck; catching the third wire is considered a perfect landing). 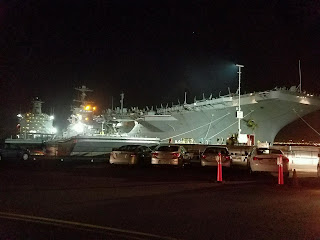 Floating City – Carriers are referred to as floating cities, and that’s no joke. With the capacity to hold 6,500 officers and crew members, the Stennis has more people in it than many rural communities here at home. There’s a post office, general store, barbershop, hospital and even a jail. Everything needed for life at sea can be found on the ship. It’s completely self sufficient. Being nuclear powered, the carrier can go indefinitely without refueling; only needing to be replenished with food, supplies and jet fuel to stay at sea and continue its mission.

I could go on and on about all the cool things I experienced, the people I met and the respect I have for anyone and everyone who spent the last seven months on that boat. I’d only spent five days and knew I’d enjoyed my time, but was ready to be back on land. But maybe no one was more ready than the family and friends who had gathered on the dock to meet their loved ones; to see them, to hold them for the first time in seven months. Seeing their faces, their signs and even their tears, definitely put my five day, once in a lifetime trip, in perspective. 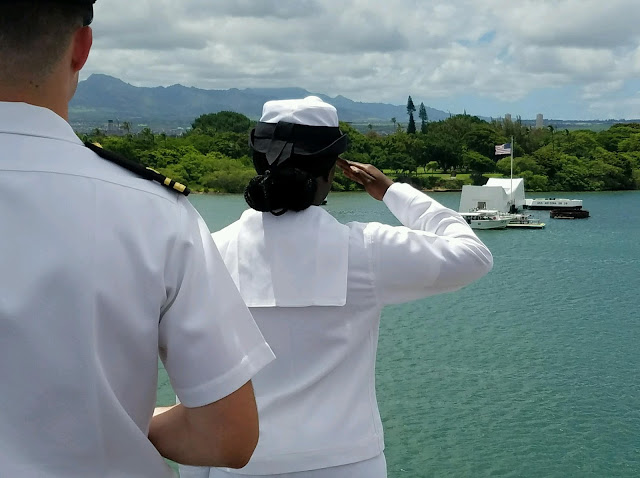