Growing up my family didn't travel internationally. Aside from a few trips to Canada, we spent our vacations and long weekends exploring the United States. We did, however, move around frequently due to my Dad's corporate career. By the time I graduated college, I had lived in 12 different places in six states. I believe that moving so much throughout my childhood significantly shaped my personality and my perspective of the world.

Quickly able to make friends and not afraid to step into uncharted territory with a smile, I have an inner curiosity and enjoy continually learning. My first notable trip outside of the U.S. was after college to visit a friend in Japan. Those ten days were life-changing. Not only did I gain an appreciation for the Japanese culture, but I fell in love with traveling.

Mission Defined: After my first adventure, I was hooked. Traveling was thrilling to me: exploring a new land, meeting different people and immersing myself in a foreign culture. Before long, my travels became a conversation topic at work. Many people asked why I was so interested in travel and to what end. Rooted in corporate America, I knew I had to come up with a logical and easily-digestible answer: a goal. At that time having been to 30-some countries, I arbitrarily put forth that my ultimate goal was to travel to 100 countries, and just like that, my mission came into focus.

Execution: Having my mission defined the next step was to outline my strategy. With a full-time job my vacation time was limited: two weeks and holidays and then eventually grabbing a third week five years in. With my vacation days as the primary bottleneck, I aimed to travel internationally at least two times each year and got creative with my trip planning:

The Critics. As with any goal, you'll always have the critics who try to rain on your parade. Throughout my mission it felt like I was constantly bombarded with questions and comments like: "Don't you put any of your money into savings? Why do you feel the need to escape your life? Why would you travel all that way and stay such a short time? There is so much to see in the U.S.; You should spend your money at home."

To these remarks I would respond with a smile thinking that not until you experience how travel can change your life, will you ever really understand. Sometimes I would explain how I say at hostels and that I've actually traveled to 49 of the 50 states, but most times I would shrug off the naysayers and remind myself that I was doing this for me, not them.

Milestones: Throughout my ten-year journey there have been many milestones with the most memorable being:


Mission Accomplished: In June 2015 I accomplished my mission of traveling to 100 countries. Having officially checked the boxes visiting 109 unique countries and territories, I was accepted into the Travelers Century Club  and received a certificate, membership card and pin. I was also given a globe memento in Jamaica by my family to commemorate the achievement. Upon reaching my goal, I created a 45-page book capturing my favorite travel photographs from around the world entitled "100 Countries." 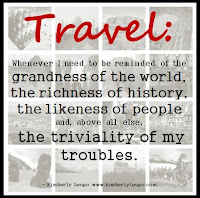 Path Forward: Although my next goal isn't yet clearly defined, I can confidently say that my traveling days will continue. I have been to six of the seven continents and am committed to seeing the icy shores of Antarctica. I'd also like to swim with the jellyfish in Palau, get lost in the history of the Middle East, and dance at carnival in Trinidad and Tobago. While my Mom would like to see me travel to every country in the world, we'll just have to see where the road takes me.