Lapland, Finland: An Arctic Safari through the Snow-Covered North - March 2016 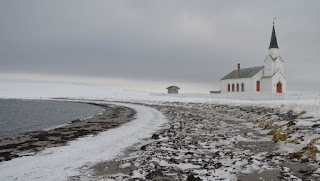 Lapland is not a country, but a region comprised of northern Norway, northern Sweden, northern Finland and the Kola Peninsula of northwestern Russia.

Encompassing the majority of Fennoscandia that lies within the Arctic Circle, Lapland's traditional inhabitants are the Sápmi people and the area's landscape is rich with mountains, fjords, glaciers, deep valleys and lakes.

Now that my husband and I are officially Finnish residents, we considered it our duty to explore the great snow-covered north and experience more of the country's culture and geography.

Our arctic safari began in the small town of Rovaniemi, Finland. Situated a few miles south of the Arctic Circle at 66.5 degrees latitude, Rovaniemi is the capital of the Finnish province of Lapland and is the official home of Santa Claus. Our time spent in Rovaniemi revolved around Santa Claus Village: an indoor/outdoor complex with shopping, activities, restaurants and a hotel.

While visiting the village a reindeer-pulled sleigh took us through a birch forest covered in snow. After the sleigh ride, we warmed our hands and toes, and grilled sausages around a campfire. There were several tiny shops in the village offering ornaments and various trinkets to visitors; we walked through a couple and took photos near the illuminated line denoting the Arctic Circle that crossed through the village before visiting Santa's Post Office.

At the post office we saw letters from children around the world requesting Christmas presents from Santa, and we took a moment to mail a note to our loved ones with the special postmark from Santa's workshop. Before long, we had seen the sights of the village and needed to make one last stop into Father Christmas' main office to take a photograph with the man himself before we left.

After an eventful night in the igloo, we set out for a day of unplanned adventure. Our goal was to drive to the northernmost tip of Finland. We estimated that from Ivalo it would take about three hours. The drive was stunning. The snow-covered roads took us through spruce forests and up to mountaintop vistas, past frozen waterfalls and glacier-filled lakes and into small fishing communities with red wooden houses. Along the way we encountered countless reindeer meandering alongside the roads, and were lucky enough to spot a white snow owl and an arctic fox.

We reached the border town of Utsjoki just before lunch. Not yet ready to turn back, we crossed over into Norway and followed the Karasjohka River east. Running on adrenaline and protected from the elements by the blanket of warmth inside our car, our new goal was to reach the Barents Sea. We stopped for lunch in the small Norwegian town of Tana Bru. Outside of the restaurant was a playground crafted of snow and ice, and we watched as children climbed all around it and slid down the ice slides.

After lunch we continued following the river as it winded northeast past teepees and small hill towns. Finally we got to the point where the river mouth opened to the icy Barents Sea. Beyond a line of fishing boats, a beautiful white church with a gray steeple beckoned us out to the peninsula in Nesseby, Norway. Excited to finally reach the Barents Sea and our northernmost latitude of 70 degrees, we threw off our shoes and ran through the snow-covered black sands and dipped our toes in the icy waters. We wandered the grounds nearby the vacant church and admired the centuries-old grave stones frozen into the earth.

Our arctic safari through Lapland was thrilling and provided no shortage of picturesque landscapes. The Finnish people treasure their solitude, and driving through the small communities in the northern part of the country, I can see why many consider the region the ultimate destination for a peaceful retreat.