I arrived into Delhi two weeks late and on a budget. I chose a cheap hotel near the train station. When I arrived, tired and sweaty, it only took a moment to notice I was the only woman in the hotel. Guests and staff included. I was shown to my second-floor room by a handful of men. The men lingered for some time in my room peering around like it was the first time they had seen the dirty, white box, but after twenty minutes passed, one man remained. I asked him to leave and instead he dropped to the floor and began scrubbing at the tiles. Although the whole room was filthy, it was apparent he was clawing at the floor just to stay in the room. I got scared of the closed door and repeatedly asked him to leave. He remained fixated on the tiles and didn’t look up. I ran to the entrance, opened the door and  began screaming over the staircase for him to leave. He left. I went back to my room and began unpacking. Upon investigating my bed, the sheets were covered with dirt and stains and it was obvious they hadn’t been washed in several uses. I repacked my belongings and slept on top of a tattered blanket. 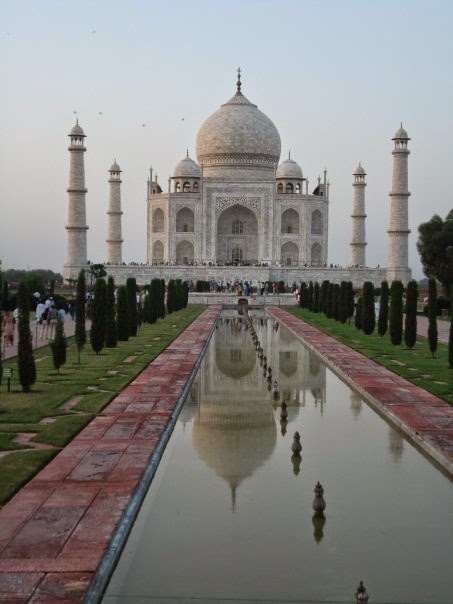 The following day was a Thursday. My only objective was to buy shampoo and conditioner which was confiscated at the Bangkok airport and to purchase tickets to Agra for the following day to see the Taj Mahal. Not nearly as simple of a task as I had hoped. I left the hotel and headed out into the street. The narrow city street was flooded with dirty men, women in saris, cows, beggars and tuk tuks. I saw men getting their beards shaved on the curb, fruit and snacks being pedaled to passersby, animals walking about aimlessly, and assorted vendors selling their wares. I wasn’t two steps out of the door when two elderly women began pulling at my hair and a young man grabbed me by the arm. I lasted about eight minutes outside of the hotel before I turned around and went back to the men’s only hotel reception to ask for help. The receptionist on the scene volunteered a bell boy to escort me to get my toiletries. He accompanied me down the street several yards to a wooden chart where I purchased small packets of shampoo then scurried back to my room.
After the hour or two it took regain my courage, I left my dark and dirty hotel room again to try to secure tickets for the train ride to Agra the following day. The reception clerk took me by the hand to the basement where he repeatedly assured me that the Taj Mahal was closed to non-Muslims on Fridays. I was in disbelief. I had planned this whole visit around going to see the palace tomorrow and flying south to Chennai on Saturday. There was no way I was going to leave India without seeing the Taj Mahal. I chose not to believe him. I argued and got directions to the nearest internet café. I did about thirty minutes of research before I realized the sad truth, he was right - the Taj was closed on Friday to me.

It was past noon and I found myself with very few options. There were no trains leaving for Agra again that day. I had no other choice but to shell out a ridiculous number of rupees and hire a non-English speaking 'driver' to deliver me to the Taj Mahal in his beat-up 1960s Buick. It was an extremely uncomfortable five hour drive, bouncing up and down on the torn-up, leather seats as we navigated the dirt roads in the 100 plus degree heat. We dodged camels and cows and monkeys and tuk tuks. Beggars and children beat on the car windows when we would brake and the heavy aroma of garbage and spices infiltrated our car.

We arrived in Agra with less than thirty minutes before the Taj Mahal closed at sunset. The driver stopped in the middle of a crowded street and pointed to where I should go. I left the car not knowing how in the world he would find me again to drive me back to the hotel in Delhi that night, but I was on a mission so I left and didn't look back.

On the long walk to the Taj Mahal I literally had to shake off beggars and children at every step - sometimes running and sometimes shouting for them to stop. I finally reached the entrance to the Taj and had but a few moments to enjoy its awesomeness. I will return.
Posted by Kimberly Leupo