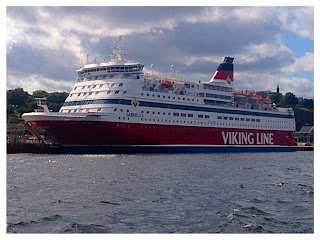 Upon moving to Finland and inquiring about weekend excursions, one suggestion always mentioned was taking an overnight ferry to neighboring Stockholm, Sweden. Several of our friends had taken this trip and likened it to a party boat with lively on-board entertainment and fun patrons.

Intrigued by a colorful weekend getaway, we did a bit of research and booked our round-trip ticket on the Viking ferry line departing from Helsinki. The Viking's Gabriella departed from the Finnish port at 6 p.m. and would arrive into Stockholm harbor 17 hours later. Because it's the journey and not the destination, and it was apparent that the vast majority of our weekend would be spent on the boat, we splurged for a suite. Our two-room en-suite came with a queen-sized bed, balcony, television and a mini-bar. The room was spacious and comfortable.

And, unlike the typical passenger car ferry, the Viking ship had all the amenities of a name-brand cruise liner: a wide range of restaurant options from grab-n-go and buffets to more formal dining, a number of bars including a karaoke nightclub, duty-free shopping, spa and sauna facilities, and children's area.

We spent the first evening walking the ship and dining at a garden restaurant overlooking the sea, before sleeping solidly in our eighth floor cabin for the night. The next morning we awakened to the captain's announcements and were greeted with a beautiful view navigating the Swedish islands that dot the channel into Stockholm's harbor. The boat docked slightly before 10 a.m. local time, and we had our running shoes on fully set to make the best of our six hours in Stockholm before the captain's horn would sound again indicating our departure.

A combination bus and boat tour appeared to be the most time-efficient way to see the city. For the next several hours we rolled by sinking storefronts built on man-made islands, the Vasa Museum home to the world's only 17th century ship and the popular ABBA tribute museum. The ride was enriched with tales of Stockholm's storied past dating back to the 13th century, with Danish Kings taking over Swedish thrones with ensuing bloodbaths, murder plots at masked balls, brawling oarswomen and the origin of the Nobel Prize. Before long we were jumping off at Gamla Stan, Stockholm's Old Town. With colorful buildings lining the cobblestone streets, we strolled through the heart of the city before grabbing a bite to eat at Restaurant Stortorgskallaren. The afternoon boat tour navigated the cluster of islands and peninsulas that comprise the city, and from the waters we snapped photos of the Royal Opera, City Hall and the Royal Palace. It was a short stay in Sweden's capital but it provided a satisfying taste of what the city had to offer.

Gabriella departed the picturesque Swedish harbor right on time and sailed out and around the rock islands and over the blue sea of the Baltic. While the ferry wasn't the frenzied party boat we were used to holding onto back home, that evening on board was amusing as we enjoyed uninhibited Finns and Swedes belting out tunes at the karaoke club and saw the sun set over the Åland Islands.