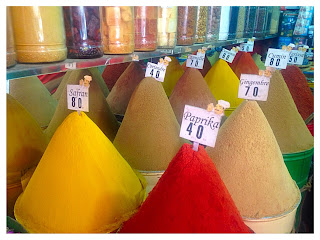 Morocco is a vivacious country thriving in the desert. Sharing its language, love of pastries and ornate interior design with France, one may think the northern African country identifies more with Western Europe than its nearby neighbors. Even with its French flare, Morocco is unlike anywhere else in the world.

Braced for an adventure, my sister and I spent six days sweating, laughing and running through this captivating country.

Our travels began in Casablanca. An international hub likened to New York City, Casablanca is an industrialized city of more than 3 million people and sits on the Atlantic coastline. While there, we spent much of our time in the old town central medina, or market. Not unlike the other medinas we'd explore, Casablanca's market was a cobblestone maze of winding, narrow alleys lined with shops and stands selling anything and everything from jewelry and tunics, to spices, cooking pots, camel bone boxes and furniture. A few other notable sites in the city include the Hassan II Mosque, Casablanca Cathedral and the Twin Towers Center.

Just a short two-hour drive north is the city of Kenitra where I detoured for a quick work trip. Also a hub for industry, the city recently embraced new visitors. Four-foot tall white and black winged storks, and their massive nests, have taken over the town. It was impossible not to cast your eyes on the nests looming atop roofs and electric poles and see the flocks flooding the sky. In addition to the enormous birds, while in Kenitra I got my first taste of the local cuisine. At a traditional Moroccan restaurant with wall murals and clanking jeweled curtains, perched atop colorful pillows, my colleagues and I dined on kebabs, couscous and the ever-present national delicacy tajine. Tajine is a meat and vegetable stew, sometimes spiced, cooked in a triangular vented pot. To accompany our meal, we sipped on mint lavender tea with just a touch of sugar. I looked on with awe as our host poured the tea from five feet in the air learning that the dramatic gesture is a sign of respect for guests.

A humming three-hour train ride took us from Casablanca to the inland cultural epicenter of Marrakech. With the tropical vegetation of Southeast Asia, the relentless, intrusive hawkers of India and the conservative garb and ritual of the Middle East, Marrakech ignited all of our senses.

During our time in the loud and bustling city we found our oasis in a cozy riad in the medina. A riad is a typical Moroccan home or palace with an interior courtyard or garden. Riad Itrane offers ten rooms each meticulously decorated with hand-carved wooden doors, stained glass windows, beautiful iron work, colorful decor and exquisitely carved ceramic light fixtures. Daily breakfasts with locally-picked dates, figs and almonds, as well as homemade breads and jams were delightful to enjoy in the open courtyard or on the rooftop overlooking the city.

Our riad was centrally located right off Jemaa el-Fnaa, the main square, so that it was easy to explore old town Marrakech by foot. Walking through the walled city center, elbow-to-elbow with locals and tourists alike, our hearts raced with both excitement and fear. We stepped cautiously as snake charmers from the Sahara Desert were scattered on carpets beating their drums and blowing their flutes somehow mysteriously controlling the cobras and rattlers that slithered at their feet. Men worked the crowd leading monkeys in diapers while Muslim women with only eyes showing beckoned for the chance to paint henna designs on our hands and feet. Set up throughout the square were vendor stands selling fresh-squeezed juices, wooden carts peddling cactus fruit and endless makeshift businesses displaying their handicrafts on carpets ... all while motorbikes zipped by and horse-drawn buggies parted the crowds.

With thousands of souls wandering, selling, yelling, haggling, charming, dancing, eating and gawking in the square it was almost surreal to see the commotion come to a screeching halt as the Islamic prayer bellowed over the loud speakers. Every day, five times a day, order would blanket the square as the vast majority of men stopped whatever they were doing, lined up orderly in rows, and repeated verses as part of the Islamic ritual.

The chaos and color of Marrakech was intoxicating, but we knew there was more to Morocco than city life. Before too long, we escaped to the countryside, bouncing from village to village over the ever-changing terrain. Navigating the white-knuckle curves of the Atlas Mountains, we saw goats grazing and thousand-year-old fossils for sale; over the hills and into the valleys were cactus of all shapes and sizes, and oases of lush palm trees; hijab wearing women were spotted carrying sacks atop of their heads and men leading donkeys loaded with supplies traveled to and from the mud brick houses that lined the roadways.

We climbed the steps of the village of Aït Benhaddou where Indiana Jones, Gladiator and the television series Game of Thrones were filmed, and dipped our toes in the crystal clear waters within Todgha Gorge, before heading to the red sand dunes of Merzouga for an unforgettable night Camping in the Sahara Desert.

Morocco drew us in and put us under her spell. The country was alive and all-consuming: the locals humble while cunning, the scenery diverse, and the sensations hypnotic. Six days provided a satisfying sampling of Morocco's flavor, and we just may go back again someday for another taste.