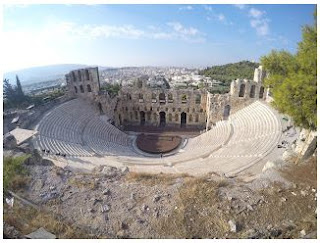 After Greek island hopping, and before venturing to the countryside to visit the ancient cities of Corinth and Mycenae, my husband, James, and I had one day to take in historic Athens.

Based at the Hotel Central in the Plaka neighborhood, we made the most of our time exploring all of the must-see attractions:

The Acropolis. Perched on a hill overlooking the city, the Acropolis of Athens is dedicated to the goddess Athena. First constructed in the 6th century BC the area contains the ruins of the Parthenon, the Propylaia, the temple of Athena Nike, the Erechtheion, and provides breath-taking views of the modern city. Get there early to avoid the crowds and beat the afternoon heat. Also of note, your 12 Euro ticket is good for entry into several other ruins throughout the city.

Temple of Olympian Zeus. Taking more than 700 years to build, this temple is revered as one of the most significant in Athens. Unfortunately, only 15 of the 104 Corinthian-style marble columns still stand.


The Ancient Greek Agora. Long before the word agora became associated with a Greek marketplace, it was the site for orators to engage the public. The ancient Athens agora was the stage for the likes of Plato, Aristotle and Socrates while being the heart of the city. Today you can walk the line of moments paying homage to each of the twelve mythological Greek gods on the way to visit the Temple of Hephaestus. Also of note the Roman agora is minutes away and, while smaller, is home to Hadrian's Library.


Our next stop was the Panathenaic Stadium. One of the most well-known sites in the country, the current stadium was built upon the grounds of an ancient Greek stadium which from 329 BC hosted games for centuries. The current stadium, constructed in 1894, is responsible for reviving the games and hosting the first International Olympic Games two years later. Fun fact: the term marathon, which also happens to be an Olympic sport, stems back to city of Marathon, Greece. Precisely 26.2 miles from Athens, it's where sandal-clad solider Phiddipides began the run to Athens to announce the victory of the Greek Army over the 50,000 Persian invaders in 490 BC.

For lunch we feasted on gyros and moussaka before walking busy Ermou Street to peek into shops selling leather sandals, Christian Orthodox relics and mink coats. We photographed the 11th century church of Panagia Kapnikarea, near Syntagma Square, and while in the neighborhood visited the Hellenic Parliament. There, every hour the soldiers of the Presidential Guard march in traditional uniform which includes funny-looking shoes with large wool pompons on the tip called tsarouhia.
The National Archaeological Museum. Our final stop was the largest museum in Greece which houses ancient Greek Art and where you can follow Greek history from the 6th century BC through the fall of the Roman Empire. 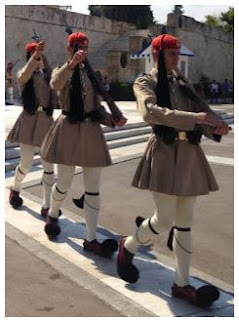 For dinner we enjoyed traditional Greek cuisine at The Old Tavern of Psaras in Plaka dining on eggplant, octopus and mussels washed down with anise-flavored ouzo. At the restaurant our animated waiter informed us that Greece is the origin of everything novel in the world and that the only word in the Greek language which isn't Greek is its name.
If you can weather the heat and mosquitoes, August is an ideal month to visit the city as the locals flock to the countryside and islands for holiday. We would not have been able to see as much of the city as we did without enlisting the help of our friendly driver, Kostas, from George's Taxi. Another handy tip is to download the free app: Athens by GreekGuide.com for accommodation and food recommendations as well as helpful information on getting around, attractions and history.
Posted by Kimberly Leupo