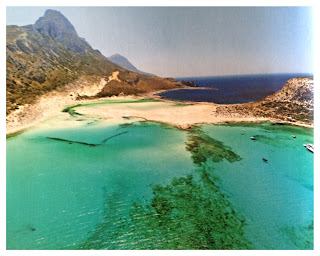 The front page of the town newspaper told the incredulous tale: "Greek woman slays Turks and saves innocent lives." And so it happened on a stormy afternoon in 1897 in Chania, Crete when Captain Anna Kontogiani came upon the attempted hangings of several innocent Greek countrymen and single-handedly took a knife to kill three Turkish military soldiers. Anna, referred to by her fellow male army soldiers as "Spanonikolis" or "Nick without a beard," went on to lead the Cretian Greek resistance in liberating Northern Greece from Turkey.

Flash back to 12,000 BC on the same island where it is believed that early humans first made landfall from Africa on wooden rafts. Thousands of years later in the 7th millennium BC, during the Neolithic period, inhabitants of Crete are credited with developing one of the first written languages: the currently undeciphered Linear A script.

Fast forward to the present: tablets, pottery and other relics from the Neolithic and other historical periods are being unearthed and help to solidify Crete's title of being the birthplace of modern European civilization.

Only a few steps down the street from an active archaeological dig is the former homestead of Captain Ana Kontogiani. Restored after being bombed by the Germans in World War II, today it is a charming hotel run by Ana's grandson Alex Stivanakis. Alex and his eleven-year-old daughter, also named Anja, own and manage the twenty rooms in the Kasteli Studios & Apartments and are delighted to share the colorful history of their home island.

A moment's walk from Kasteli is the beautiful harbor of Chania where million-dollar yachts rub up against humble fishing boats and seafood and souvalki restaurants overlook the water. A short bus ride away is the port of Kissamos where you can board a ferry to visit the islands of Gramvousa and Balos, and splash through the crystal clear waters of the green lagoon.

Definitely a picturesque spot for a holiday or lesson in history, Crete with its snow-capped white mountains is the largest of the Greek islands and only a 30-minute flight from Athens.