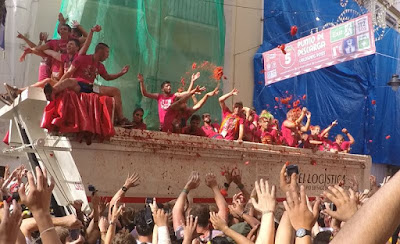 Every year on the last Wednesday of August, tens of thousands of people flock to the La Tomatina Festival in Buñol, Spain. Just a short 45 minute drive from the city of Valencia, Buñol erupts as people from all over the world come to take part in the largest food fight in the world.

What started in 1945 as an unruly spat disrupting a community party, has since grown into a world-renowned organized event. Every year attracting more and more people, the sleepy town of Buñol, population 9,000, has been overcome by festival seekers. In 2012 La Tomatina hosted more than 50,000 people, overrunning the narrow, cobblestone streets and prompting the town to begin rationing tickets to allow only 22,000 fun-seekers to partake in the tomato frenzy.

While the hour-long food fight itself is an amazing spectacle: tomatoes whizzing through the air; dump trucks uploading produce by the barrel; goggle-clad participants wading around in calf-high puree; and everyone dodging, ducking and shielding their faces from the next tomato bullet - a less publicized tradition takes place for several hours prior to the fight.

La Tomatina festival "officially" begins once someone is able to climb to the top of telephone pole plastered with grease and capture the cooked ham dangling from the top. Seems simple enough, right? Well, apparently the feat hasn't been accomplished for six years running. Watching the hoards of bare-chested backpackers, over-ambitious jocks and leggy attention-seekers attempt the challenge, I came to reflect on what this microcosm of chaos could teach us about the world.

Teamwork. The ham is hoisted atop a wooden pole 25 feet high. The pole is then lathered in animal fat several inches deep from top to bottom. Without climbing gear, it's unlikely any one person would be successful reaching the top alone ... but it took quite a while for the individual heroes to band together and even then I wouldn't say the group was functioning as a team with a shared vision.

Knowing Your Strengths. After the numerous attempts by individuals to mount the pole, it became apparent to many that teamwork would be required to capture the ham. However, there seemed to be a lot of role confusion and ineffective communication among the ranks. One would think the sturdier men would come together to form the base of the effort and a couple athletic people could climb atop to help propel the smaller, more nimble challengers to the top ... but alas, time and time again, the base would get created, people would be pushed halfway up the pole and then a large muscle-bound frat boy would trample everyone to get to the top and crumble the pyramid.

Leadership. So while anyone with half a brain in the crowd could see the current strategy was fruitless and they were free to offer advice, most just stood back and watched. At some point during the madness, a drunk guy with a gold-fringed cape leapt onto a wall post and appointed himself leader of the effort. From his position above the frenzy, he yelled for the crowd to move in to support the base and attempted to recruit burly guys and tiny Asian girls to get involved in the climb ... but leadership needs to be credible and to be listened to by its followers, and unfortunately this costumed bumbling dude was largely ignored.

Going for the Glory. As with many endeavors, it's apparently perceived not good enough to just be a part of the victory, but what's really important is to be the guy at the top. It was always the bandana-wearing, spray-tanned, shirtless guy who stepped on the girls' faces trying to reach for the ham. No matter if it caused the pyramid to collapse a handful of times or if the crowd was booing with fury, that guy wanted to be the one to take the ham. And that's not to say it was only the guys whose egos were to blame, without fail, half of the people who attempted to ascend the pole would get hoisted above the crowd only to turn around and pose for a social media glamour shot before falling ... but ultimately there were too many people who were in it for themselves and each one of the attempts was foiled by selfishness.

Needless to say, that morning the ham remained at the top of the pole. Sloshing around in a watery pool of blood, many with ripped or missing clothing, the majority of pole climbers stumbled away with both their bodies and egos badly bruised. Despite the futile attempts to capture the ham, at precisely 11 a.m. a shot was fired commencing La Tomatina, and for the next hour, more than 300,000 pounds of tomatoes were squashed, tossed and trampled.

While it was just a ridiculous symbolic gesture to start the festival, it would have been refreshing to witness the group come together as a team with a strategy and capture the ham. Here's hoping next year's festival goers will be a little wiser! 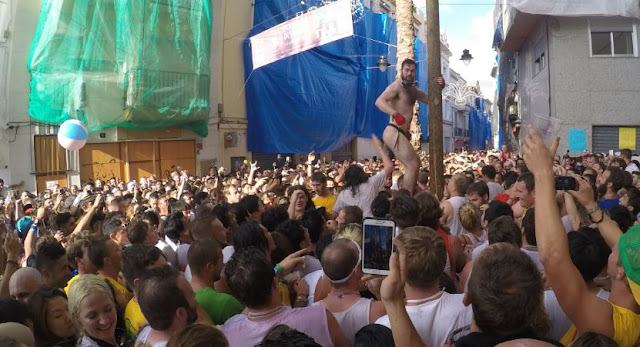