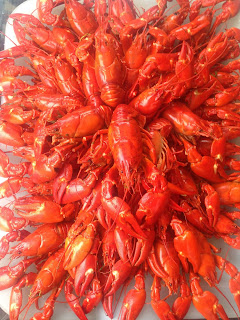 Whether you call them crawfish, crayfish, crawdads, mudbugs or freshwater lobsters, these delectable crustaceans are found and eaten in several countries around the world.

While the Finnish variety is two to three times as big as the crawfish enjoyed in the southern United States, the meat tastes just the same. In practice with immersing ourselves in the Finnish culture while sharing our own "southern" American heritage with our new neighbors, this past weekend we engaged in a bit of a crawfish cooking duel.

Over the several weeks leading up to Crawfish Face Off, the unknowing crawfish were lured into underwater, steel-wired cages where they were trapped and collected. The day of the duel neighbors and friends hailing from Finland, U.S., Greece, Scotland and South Africa were invited to sample the fare.

The day of the event the crawfish were prepared and served two ways:

Finnish Style: Boiled for precisely 22 minutes in water seasoned with salt, sugar and dill. Let cool for several hours. Served cold and accompanied with a slice of brown bread slathered in butter. Instructions were to pry the crawfish meat from the tails and abnormally large claws using a tiny knife-like cutting utensil, place the meat on the slice of buttered brown bread, garnish with dill as desired and enjoy with a cold shot of vodka.

American Style: Boiled for 'enough' time in water seasoned with cayenne, salt, garlic and red pepper, along with a hearty mixture of potatoes, corn, asparagus, mushrooms, onions, lemons, garlic and smoked sausage. Thrown into an ice chest and scooped out hot with the accompaniments. The tail and claw crawfish meat is then retrieved using your fingers and some adventurous souls even elect to suck out the crawfish brains using their mouths.

At Crawfish Face Off 2015 there was plenty of good eating. While the duel ended in a draw - the Finnish liked their dill-seasoned cold crayfish and the Americans their spiced up steaming mudbugs, everyone went home with a full stomach and a smile.
Posted by Kimberly Leupo