Around the World Ticket: Flashback - June 2007

Looking to see the world? Have a bit of time on your hands with a list of places to go?
Want the flexibility to roam the land without being locked into a schedule?
Then maybe an around the world ticket is for you. 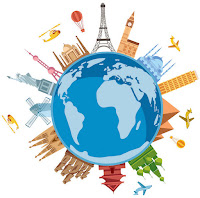 Often considered an urban myth or written off as something that must be ridiculously expensive, let me tell you, the coveted around the world ticket is real ... and it's a very, very good thing. In 2007 I set out to backpack from Sydney, Australia to New York City westward. I had seven months and a limited budget. Knowing in advance where I wanted to go and that I'd be back in the U.S. once more before my trip, I did a little bit of research.

While I knew I'd be taking advantage of hostels and public transport, I needed a way to get from one country (or continent) to the next without dropping a lot of cash for one-way airline tickets. I stumbled upon a deal offered through American Airlines that provided various around the world ticket options for either a continent-based or distance-based fare.

At the time of my trip, and for several similar programs today, the conditions of the ticket were:
My seven-month-around-the-world-backpacking journey was one of the most incredible experiences of my life. The around the world ticket allowed me the freedom to extend one leg of my trip to get scuba certified in Phuket, was flexible enough to modify plans for volunteering in India after a Himalayan mudslide, and afforded me the peace of mind to take a last-minute detour to Egypt. The flexibility was reason enough for this to be the right option to me, but after doing the math, it was hard to beat the price as well. I would encourage anyone to look into this option if they intend to cover a lot of ground regardless of their travel time.