Tbilisi, Georgia: Why the "Other" Georgia Deserves a Look - February 2016 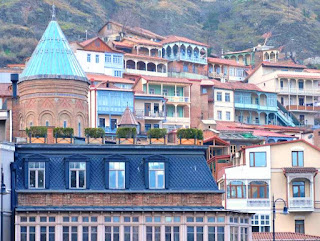 Nestled in the foothills of the Caucasus Mountains and slowly emerging from Russia's shadow, sits the humble country of Georgia. A popular holiday destination for skiers and only a two-hour flight from Moscow, the capital welcomes visitors with its ever-present tourism slogan: "Tbilisi: the city that loves you."

And love you, it truly does, inviting Americans and many others into its country visa-free. During our long weekend in Tbilisi, we were surprised by the country's distinct culture and old world charm.

Old Tbilisi is a captivating canvas of ornate architecture and vivid color. A well-traveled stop along the Silk Road, Georgia has been influenced by a variety of cultures over hundreds of years. The country exudes Asian, Indian, Arabic, Soviet and western influences, all while remaining true to its own unique heritage. A walk through town will take you down narrow streets, past ancient churches and by brick-domed sulfur baths. On one side of the city you can visit the magnificent 100-meter high Sameba Cathedral and Holy Trinity Church built in 2002. On the other take an aerial tramway to the hills above the old town to stroll the grounds the Narikala Fortress and gaze up at the grandiose Kartvlis Deda: a twenty-meter tall aluminum statue of a woman referred to as the Mother of Georgia who welcomes her friends with a bowl of wine in one hand and warns her enemies with a sword in the other.

Clustered in the central part of the old city you can see the centuries-old Metekhi Christian Orthodox Church perched on the cliffs above the Mtkvari River within view of a synagogue, mosque and turquoise-veneered Armenian church. Beneath the religious buildings and winding cobblestone streets is an underground bazaar with a passageway lined with market stalls hawking jewel-adorned knives, orange clay handicrafts, hats woven from sheep's wool and hollowed animal horns for wine drinking. Ancient scripts and trinkets display the beautiful Georgian alphabet, and the locals laugh as the foreigners attempt to muster the unfamiliar sounds needed to articulate the Georgian language.

The Georgian people are proud, and eat and drink gregariously. Often regarded as the birthplace of wine, Georgia boasts more than 520 varieties of grapes producing nearly 300 unique types of wine. White, red, green and yellow grapes are used to make the wine and also to produce the local vodka drink, Chacha. For a non-alcoholic beverage, try a glass of tarragon soda which bubbles fluorescent green and is sure to deliver a sugary fix.

A peek inside a Georgian cafe, past the plumes of hookah smoke, you'll see oversized pillows and colorful table cloths displaying the warm and hearty cuisine. Typical Georgian dishes include khinkhali: dumplings filled with meat, potatoes or mushrooms, kachapuri: bread stuffed with thick yellow cheese, mtsvadi: grilled skewered meat, and kababi: seasoned meat wrapped in a thin flat bread. Warm spiced beans are also a national staple along with fruit and nut jellies, spreads and candies. A meal for four people with drinks cost us about $15 U.S. 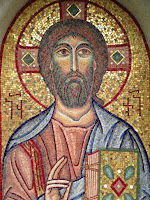 Religion has a resounding presence in the hearts and homes of the Georgian people, and it would be impossible to travel too far without seeing the circle surrounded Georgian cross marked for a blessing. Less than a twenty-minute drive from Tbilisi is the ancient capital of Mtskheta which is often considered the birthplace of Christianity in Eastern Europe. Designated as a UNESCO World Heritage site, Mtskheta is home to Svetitskhoveli Cathedral and Jvari Monastery. Other popular day trips from the capital include a drive through wine country or a visit to the surrounding snow-capped mountains.

Georgia isn't just another nation who escaped the suffocating Soviet grip. The Georgian people are strong and have managed to retain their unique identity through generations of war and occupation. Tbilisi is a city that has been destroyed and rebuilt 29 times, and through it the spirit of Georgia has prevailed. Today the country is eager to show its heart to the world.