Kyaiktiyo, Myanmar: Our Pilgrimage to Golden Rock Pagoda - May 2016 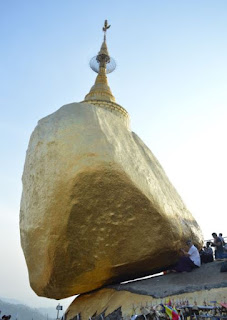 Precariously perched on the top of rock dangerously close to a mountain's edge, a granite boulder covered in gold hoists a 24-foot-tall pagoda into the sky. Legend has it that the golden rock balances on a single thread of the Buddha's hair. The Golden Rock Pagoda is one of the world's most revered Buddhist sites; it is said that one look at the gravity-defying wonder is enough to inspire any person to become a follower of the faith.

Our pilgrimage to the Golden Rock Pagoda began in Yangon. We were up at dawn waving goodbye to the city as we drove east into the Burmese countryside. Wooden stands with thatch roofs flanked the roadways selling fruits and fish. Past the rice paddy fields and river valleys, we met the mountains upon entering the Mon state.

After nearly four hours of driving we reached the small town of Kyaiktiyo. "Base camp" as they referred to it was a crowded bus depot on the outskirts of town. We were pulled out of our air-conditioned car and thrust into the blanketing 107 degree Fahrenheit heat.

A young Burmese boy motioned for us to climb onto a platform and wait our turn to be loaded into a truck. The back of the truck was open with seven wooden pew-like planks. The noticeably over-heated driver was strict in enforcing six people per plank. After nearly an hour of waiting and organizing in the back of the truck, we held on tight to the metal bar in front of our seat as we began the ascent of Mount Kyaiktiyo with forty of our 'closest' Burmese friends.

The heat was suffocating and the sun scorched our skin. Two children behind us were pulling at my hair and an Indian woman in front was somehow sitting on my knees. We were crammed in so tight we couldn't move. The 45-minute journey to the top of the forested mountain took us up a steep switch back paved road. Tree branches beat the truck. Our only relief was the breeze that sometimes penetrated the pile of cramped pilgrims and the sight of the towering pagoda we would steal every once and again.

Upon reaching the top of the mountain, all of the pilgrims eagerly jumped out of the truck and into the arms of the sweat-drenched locals surrounding the truck peddling everything from straw hats and umbrellas, to snake oil. After pushing through the crowd, we proceeded down a narrow road lined with stores and hotels towards the pagoda.

A few moments later we reached the entrance to the religious area. There we removed our sandals out of respect and left them in a crate. The rest of our journey was to be done barefoot on marble slabs. Our walk turned into a jog as we jumped for the white and gray marble bricks which seemed much cooler than the darker ones. After nearly one mile by foot we finally set our sights on the pagoda.

It was smaller than we had expected but the way in which the boulder appeared to balance on the mountain face was awe-inspiring. The men were permitted to purchase gold leaves to press onto the golden rock. Incense swirled in the air and a line of newly appointed monks marched past us. Hundreds of fellow pilgrims crowded the site many preparing blankets and food to spend the night on the marble grounds. It appeared that from every angle the golden rock glowed a differing hue of gold-yellow-orange as it reflected the light. As the sun set behind the Golden Rock Pagoda it was hard not to be entranced by the beauty of this sacred site. 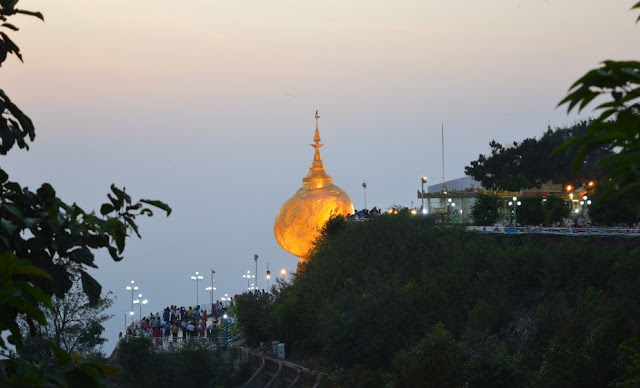 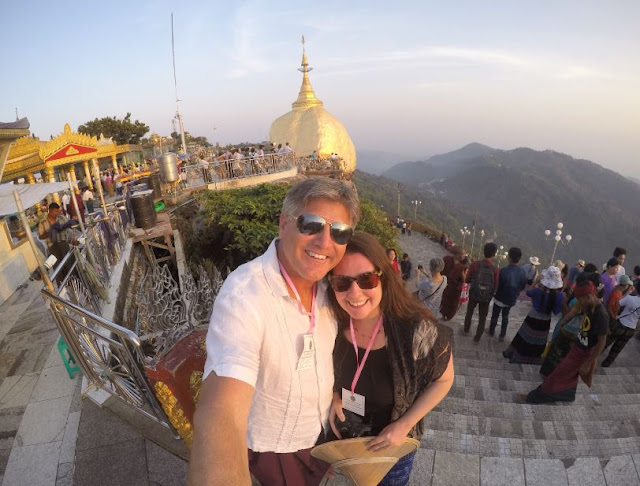