Almaty, Kazakhstan: Don't Whistle After You Drink Milk Champagne in a Yurt 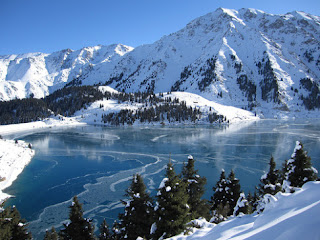 Formerly part of the Soviet Union, Kazakhstan declared independence in 1991, however we learned at the airport that Russia continues to regard the country as a domestic destination.

Nonetheless, a five-and-a-half hour, overnight flight from St. Petersburg took us to the world's largest landlocked country and specifically to its former capital and most populated city of Almaty.

Almaty is located in the southeastern part of the country at the foothills of the Trans-Ili Alatau mountains. Literally translated, Almaty means "a place of apples" and is believed to be where the first apple trees grew around 20 million years ago.

Upon arrival, the locals advised the thing to do was to go up into the mountains. In addition to enjoying incredible views of Big Almaty Lake and the forested surroundings, the Medeo Sports Center is housed in the mountains boasting the highest skating rink in the world at 5,545 feet above sea level.

While the country isn't yet on many tourists' radar, the city of Almaty does have a few notable attractions including Holy Ascension Cathedral, the Green Bazaar, Republic Square, Central Almaty Mosque and Park of the First President of the Republic of Kazakhstan.

While visiting we learned that Kazakh refers to both the country's people and its language, and that the language is of Turkic origins with many Russian and Arabic words. It was not written until the 1860s where it was captured in Arabic script, and then in 1940 the country adopted the Cyrillic alphabet along with a few extra symbols.

The names of seven countries in Central Asia end in "stan:" a suffix meaning "land" in Persian. The word Kazakh itself means "wanderers" or "outlaws," and is fitting for the nation comprised of formerly nomadic tribes. Traditionally, Kazakhs lived in yurts, or collapsible tents with wooden frames covered by felt which they could carry along in their travels.

It is believed that ancient Kazakhs were the first to domesticate and ride horses, and horses are still a dominant theme in their culture today.

Kumis, or what the locals refer to as milk champagne, is a traditional drink made of fermented mare's milk, and the national dish is beshbarmak which is a collection of noodles, boiled horse meat and spices. A popular sport in the country is kokpar in which riders on horseback play a variation of polo with a headless goat carcass.

The adventure to our first "stan" was memorable and educational. Of all the cultural facts, likely the most critical was the local belief that whistling a song inside a building will make you poor for the rest of your life. A word to the wise: keep your whistling lips on lockdown or stick with humming unless you are riding horseback through the mountains!
Posted by Kimberly Leupo