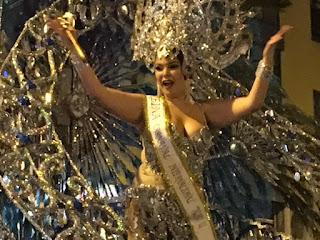 Located off the western coast of Morocco, the Canary Islands are an autonomous community of Spain. The archipelago includes seven main islands and several smaller islets all with a pleasant subtropical climate. When considering a weekend getaway to the Canaries, each of the islands has unique offerings and it's important to do your research.

Because we were visiting during Carnival, or Mardi Gras, we chose Tenerife. The island of Tenerife is known for having the second most popular and internationally well-known carnival after Rio de Janeiro.

As the majority of Carnival festivities aren't scheduled until after dark, we were able to spend the days exploring the island. We stashed our suitcases in the northwestern port town of Puerto de la Cruz and rented a car so that we could easily navigate the island.

A scenic spot to walk along the ocean and grab some fresh seafood, we stopped by the area around Castillo San Felipe before driving south along the coast. It takes approximately two hours to drive the entire perimeter of Tenerife. The largest and most populated of all of the Canary Islands, its most well-known attraction is Mount Teide which is the highest elevation in Spain, the third-largest volcano in the world and located in the center of the island.

The roads on the western side of the island wind in and around small coastal towns and climb to high elevations before dropping down to sea level in the south.

We spent the afternoon in the town of Los Cristianos on the beach and admiring the elaborate sand sculptures. The beaches in the south are golden compared to those in the north with black sands.

Based on the architecture we saw, Tenerife's heyday was in the 1970s and coincidentally many of the island's visitors looked like they may have peaked during that time as well.

Nevertheless, no matter your age, when the sun went down the party started. Drinks in hand, we stood next to the live band and watched as the Carnival Announcement parade moved into the main square. Marching bands and dancers flooded the streets and the Carnival Queen sparkled from head to toe waving to the crowds as her feathered float passed by.