Would you like to watch the sun rise over temples that date back to the 12th century? Does a tarantula kebab, scorpion salad or ant-stuffed spring roll sound appetizing? Are you in the market for a holiday where you can get by on less than $50 a day? 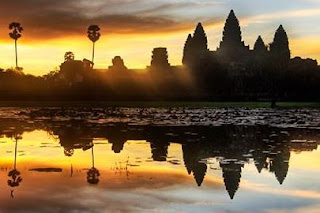 If you answered yes to any of these tantalizing questions, and are down for seeing some buffalo racing in your spare time, the country of Cambodia in Southeast Asia just may be the place for you.

I visited Cambodia for the first time ten years ago. From the moment I stepped off the plane until I waved goodbye, I was showered with smiles and hospitality. The Cambodian people are welcoming and eager to share their rich and unique culture.

I attribute much of my positive experience in Cambodia to my friend, Peou. When I met Kanh Peou he drove a taxi cab and offered to show me around his hometown of Siem Reap. Now Peou is a professional guide and licensed tour driver who operates his own business. Angkor Family Taxi provides one to four-day tours throughout Cambodia with options for any budget. Here are a few of the attractions and activities you can enjoy in and around Siem Reap with Peou:

Angkor Wat. Built in the mid-12th century by King Suryavaraman II, it's the largest temple in the world and Cambodia's most well-known tourist attraction. The structure is a three-tiered pyramid crowned by five lotus-like towers rising 65 meters from the ground and surrounded by a moat. Nearly 2,000 distinct carvings decorate its walls depicting stories and characters from Hindu mythology and historical wars. The temple was dedicated to the Hindu god, Vishnu, and served as the state temple under Khmer rule.

South Gate of Angkor Thom. The best-preserved entrance to the ancient city, it extends about fifty meters across a moat. Each side of the causeway is fashioned with 54 stone figures telling a famous Hindu story.

Ta Prohm. One of his first major projects, this temple was dedicated to Khmer King Jayavarman VII's mother. It was originally constructed as a Buddhist monastery and was enormously wealthy in its time boasting control of over 3,000 villages. This temple was also the location for the 2001 film Lara Croft: Tomb Raider.

Bayon. Constructed in the 12th century, Bayon is a Buddhist temple known for its giant stone faces with serene and smiling expressions.

Baphoun. Built as Hindu temple and later converted to a Buddhist temple, this structure has unique animal carvings at the entrance and a large reclining Buddha on the west side.

Neak Pean. An island temple that sits at the axis of a lotus pattern created of eight pools. Named for the surrounding coiled serpent sculptures, its waters are believed to have healing properties.

Preah Ko. The first temple to be built in the ancient city of Hariharalya in the late 9th century. Its six towers and their carvings are beautifully preserved as are the statues of sacred bulls staged at the temple's entrance.

In addition to this sampling of ancient sites around Siem Reap, Peou can customize your tour to include a visit to a floating village, the Angkor National Museum, Kulen Mountain and waterfalls, or any number of other interesting places in the region. So whether you're into sunsets or scorpions, temples or waterfalls, Cambodia is well-worth a visit, and Peou is just the guy to show you around.