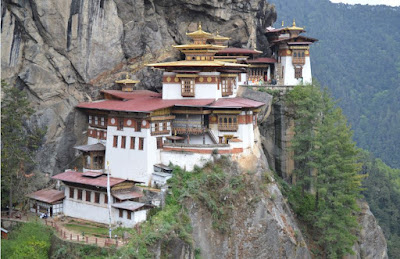 "How much farther?" I asked, bent forward, hands on my knees, dripping with perspiration and gasping for air. Sonam, our twenty-something Bhutanese guide with calves chiseled of granite, grinned over his shoulder and waved me on, "We are nearly halfway to the halfway point."

After a gratuitous sigh and a serious swig of water, I planted one dusty sneaker forward and continued up the rocky, dirt trail trying my hardest to acclimate to the altitude. My husband and I, and our cheery local guide, were trekking to the mystical Tiger's Nest, also known as Taktsang, tucked in the Himalayan Mountains overlooking Paro, Bhutan.

Tiger's Nest, the most famous cultural icon in Bhutan, is an elaborate temple complex built into a rock face with a legend that dates back hundreds of years. The monastery was given its name from the tale that Guru Padmasambhava flew from Tibet to the sacred site in 1692 on the back of a tigress to introduce Buddhism to Bhutan. It was on the peak that the Guru spent three years, three months, three weeks, three days and three hours during the 8th century meditating in a cave.

Today the monastery clings to a cliff side at an elevation of more than 10,000 feet above sea level towering over the Upper Paro Valley and is comprised of four main temples interconnected through rock stairways and 13 taktsang or "tiger lair" caves used for meditation.

The southern pass trek used by religious devotees led us for four hours through blue pine forests, by colorful prayer flags, and up almost vertical rock slopes to reach the summit. While it took more than a few moments to catch our breath, standing atop one of the most sacred mountains in the world was a magical experience ... and the hour and a half run downhill was a pretty exhilarating reward as well. 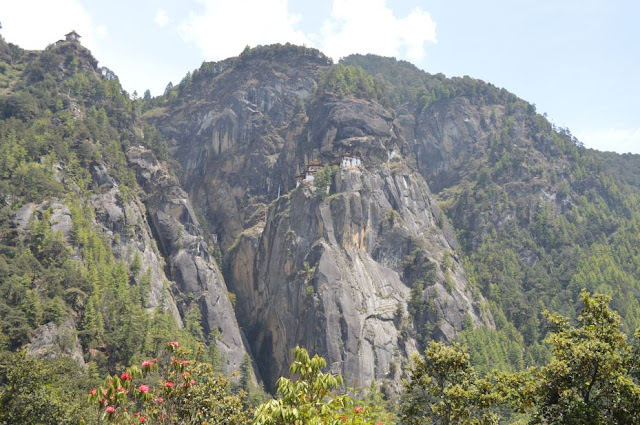