Thimphu, Bhutan: Stumbling Upon or Selling Shangri-La? - May 2016

Shangri-La: a mystical, harmonious valley; an earthly paradise; a mythical Himalayan utopia where people are chronically happy and isolated from the outside world 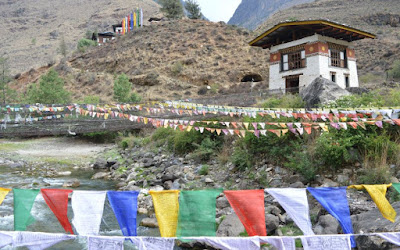 For years many have touted that they may have stumbled upon and discovered the closest embodiment to the fictional Shangri-La in the small land-locked country of Bhutan. At first blush it's not difficult to support the claim with its picturesque location in the Himalayans and well-known claim to have the world's happiest citizens. But if you look a little closer, you may just see the framework for one of the most cleverly concocted tourism schemes in the modern day history.

Painting the Perfect Picture
In the valleys below the snow-covered peaks of the Himalayan mountains, sit swirling rivers with pristine waters, winding narrow roads, finely-manicured fields and cozy villages and towns baring traditional Bhutanese architecture. It's a scene resembling the perfect landscape painting.

Pair the beautiful scenery with the widespread notion that the Bhutanese people are the happiest on the planet and it's no wonder Bhutan is often regarded as the last Shangri-La.

The Tourism Council of Bhutan states that the government holds a higher regard for the Gross National Happiness of its people than the Gross Domestic Product of the country, and claims that the Bhutanese need not amass material wealth in order to achieve happiness. The nation's Gross National Happiness philosophy is founded upon four pillars: equitable and equal socio-economic development; preservation and promotion of cultural and spiritual heritage; conservation of the environment; and good governance.

While Bhutan boasts a carbon-neutral status, aspires to grow 100 percent organic food by 2020, and holds a constitution which declares no less than 60 percent of its land remain forested, there is more to this relatively-unknown country than meets the eye.

The Challenge of Travel
In order to experience Bhutan for yourself, it is going to cost you, and it is going to be a complicated process. Allegedly protecting the country from the evils of tourism and realistically deterring low-budget, backpacker-style travel, the Government of Bhutan retains strict control and oversight over travel planning and execution. To visit the country one must go through the following highly-structured, four-step process:

1.) Visit The Tourism Council of Bhutan's official website. Select a tour operator from the list of hundreds of "approved" guides. Checking elsewhere online for vendor reviews can be helpful.
2.) Contact the tour operator with your travel dates and preferences. Settle upon a tour itinerary and price; most of the tours are standard and price differences are minimal. The government imposes a sustainable tourism royalty along with a minimum daily package for tourists of  USD $250 per person for tourists traveling in a group of three persons or more which includes accommodation, transportation, meals and the supervision of a registered guide. Expect additional surcharges for couple or solo travel and to upgrade facilities to four or five star.
3.) Wire the payment for the tour along with the visa fee to the Bhutan National Bank at least one month in advance of travel. While seemingly simple, this procedure can be arduous and require multiple attempts.
4.) Once the details of your visit are confirmed, the tour operator will assist you in making your flight arrangements on one of the government-run airlines and in sourcing your Bhutanese visa.

An Artfully-Devised Itinerary
Regardless of the operator you select, your tour through the country of Bhutan will undoubtedly follow the government-mandated route having you visit the typical tourist attractions like Buddha Point, Dochula Pass and Taktshang (Tiger's Nest) and you'll find yourself eating at restaurants catering only to tourists and hotels built exclusively for foreigners. You can find our detailed six-day itinerary by Rainbow Tours & Treks here.

The Truth Behind the Facade
While your entire visit to Bhutan is perfectly scripted from the moment you land at the international airport in Paro to your ascent out over the Himalayas, it doesn't take much to reveal the ruse. Upon walking through the capital of Thimphu, you are more likely to erupt into a jog to avoid an unruly pack of stray dogs than you are to be welcomed into a store with a smile. The locals aren't dancing in colorful garb like they do in the festival photographs but are instead waving off the beggars on the street corners or the lingering stench of the above-ground sewage flow.

The truth is that Bhutan's economy is struggling. The Bhutanese people were only granted access to television and the internet in 1999. Government censorship abounds. When asked about his desire to travel outside of the country, our government-provided Bhutanese guide smirked and replied, "Why would we want to waste our money on traveling? We have everything we need right here. We don't concern ourselves with the world's problems." Honest answer? Maybe. Government-endorsed message? Partially. Ironic? Completely.

So what's your take? Is Bhutan with its unspoiled charms and festival-rich culture the last Shangri-La or is the country carefully constructing a fabled facade to lure travelers at a premium? Whatever your resolve, a visit to this unique land promises to be a one-of-a-kind adventure.