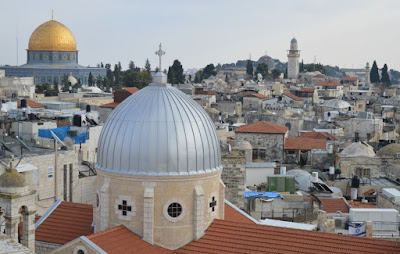 The ancient city of Jerusalem is one of the most contested places on the planet. A volatile epicenter of the three Abrahamic religions, its history dates back the fourth millennium B.C. and the controversy that surrounds the land is beyond measure.

Referred to as the Holy City, Jerusalem is of great historical significance in Judaism, Islam and Christianity.

Jewish people consider Jerusalem the central symbol of importance due to biblical tradition which tells that King David conquered Jerusalem from the Jebusites and established it as the capital of the United Kingdom of Israel, and that his son, King Solomon, commissioned the building of the First Temple.

In Sunni Islam, and according to the Quran, Jerusalem is prized as the third-holiest city behind Mecca and Medina because of the belief that Muhammad, the Holy Prophet, made his Night Journey to the city and ten years later ascended to heaven where he spoke to God. Jerusalem was also the first Qiblah, or focal point direction used for Muslim prayer.

Also a pilgrimage site for Christians, Jerusalem is where Jesus, the Christ, was arrested, tried and sentenced by Pontius Pilate. He walked the Via Dolorosa to his crucifixion and, according to the New Testament, was resurrected.

In large part due to its religious importance, the city of Jerusalem has been destroyed at least twice, besieged 23 times, attacked 52 times and captured and recaptured 44 times. Despite it's storied history, there remain numerous sites to visit of historical, cultural and religious importance:

The Old City. Believed to be one of the oldest cities in the world, Old City Jerusalem is contained within stone walls and divided into quarters belonging to the Armenians, Christians, Jews and Muslims. Each quarter has its own distinct flavor and several notable sites. The entrance gates to the city and numerous markets contained inside are also worthy of a look.

Temple Mount. The hill located in the Old City is one of the most important religious sites in the world. Presently the site contains three monumental structures: the al-Aqsa Mosque, the Dome of the Rock and the Dome of the Chain. The site can be reached through eleven gates, of which ten are currently reserved for Muslims and one can be accessed by non-Muslims only during specific hours.

The Kotel. Also referred to as the Western or Wailing Wall, this section of the western retaining wall of the Temple Mount is Judaism’s holiest site and for 2,000 years was the closest Jews wanting to pray at the place where the Holy Temple once stood, were permitted to approach.


The Church of the Holy Sepulcher. The holiest site in Christianity and currently controlled by six Christian denominations: the Greek Orthodox, Roman Catholics, Armenians, Coptics, Syriacs and Ethiopians, the church was built in 330 on and around Golgotha, the hill of crucifixion or Calvary, and the tomb of Jesus' burial. The original church was destroyed twice and the structure which stands today dates back the 12th century.

Mount of Olives. A mountain ridge east of the Old City houses Jewish graves dating back 3,000 years and is also believed to be the site of several key events in the life of Jesus. According to the Acts of the Apostles, it is also where Jesus ascended to heaven.

David's Tomb. Located on Mount Zion, the area is viewed as the burial place of David, King of Israel.