Despite the ever-present tension and sporadic violence recently, we were so close to Palestine territory already being in Jerusalem that we felt we needed to see what life was like on the other side of the heavily-armed wall.

Knowing that it may be too complicated and dangerous to do on our own, we contacted an Israeli for help. Our friend Charles said that he could pick us up from our hotel and drive us to a checkpoint into the Palestinian Authority, but that is as far as he was allowed to go; he would arrange for others to meet up with us and show us around the town of Bethlehem. 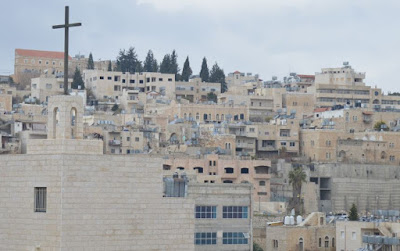 With passports in hand, we jumped into his Israeli white-plated jeep and hoped for the best. The checkpoint hand-off could easily be compared, or mistaken for a sketchy drug deal. At the unmarked crossing we pulled in next to an old sedan with a green license plate and the letter P in the corner; unlike Charles' license plate, the green plate permitted vehicles to travel both in Israeli and Palestinian jurisdiction.

We were shuffled from one car to another in an empty, barbed-wire enclosed parking lot. Our new driver didn't speak much English but sped through the town past the run-down block houses and litter-filled streets. Due to the license plate and most likely the way we looked through the car's backseat windows, there was no formal security check and no need to present our documents.

After a few minutes the driver abruptly pulled over and a man in an oversized black coat slid into the passenger's seat. The man glanced over his shoulder and said, "so you want to see the church? My husband and I both nodded and exchanged hesitant glances. "So it's under construction right now," he explained. "So you won't see much but I'll take you there anyway."

"The church" was Bethlehem's most notable attraction and more accurately referred to as the Church of the Nativity. In 327 Constantine the Great commissioned the church to be built on the site traditionally believed to be the birthplace of Jesus Christ.

Today a large basilica is housed on the site along with a smaller church and several chapels. Beneath the basilica is an underground cave referred to as the Grotto of the Nativity where Jesus' birthplace is marked by a 14-pointed silver star underneath an alter. Not far from the grotto is the underground Chapel of the Innocents, commemorating the children murdered by King Herod, which is believed to be on the site of the two to three-bedroom inn in which Mary and Joseph paid a visit.

The basilica is currently under construction and much of it is hidden by scaffolding. Our Christian Palestinian guide explained that under Muslim law whoever fixes the roof of a structure owns it. Therefore for a long time the Church of the Nativity lay in disrepair while the leaders of the area's Catholic, Greek Orthodox and Armenian communities debated how to best handle the situation.

Fortunately, in 2010 with the help of U.S. aid dollars, a plan to restore the basilica was agreed upon by all parties. Now all three Christian religious communities share the Church of the Nativity and stagger services to accommodate all parishioners. Upon our visit we learned that Christmas would be celebrated on three separate occasions at the church: December 25th for the Catholics, January 7th for the Greek Orthodox and January 17th for the Armenians.

After touring several buildings on the church grounds, we got back into the car and headed towards the de facto border. Watching the depressed town pass by, I asked our guide what it was like to be a Christian living in Bethlehem today. "It's hard," he replied with a long face. "Just last week before our Christmas celebration the main Christmas tree in the public square was broken in half. It made us all very sad. Please don't tell anyone in Jerusalem though; I don't want to start any trouble."

He went on to explain that only twenty to thirty percent of the Christian Palestinian community remain in Bethlehem. Most have fled to more-welcoming communities in Chicago, Chile or El Salvador because they felt that they were losing their identity in the Muslim-led Palestinian territory. As he spoke I stared out the window at the cement-paneled wall which divided the contested land. Covering the graffiti that has collected over the years, mounted placards quote residents still hopeful for change and hopeful that peace will someday blanket the land. 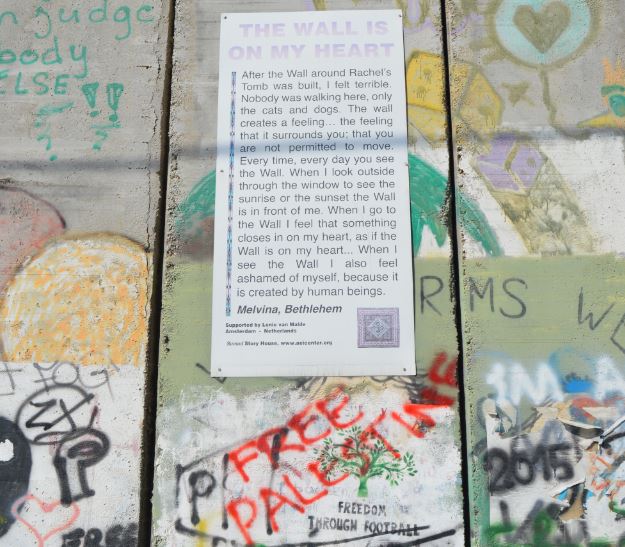