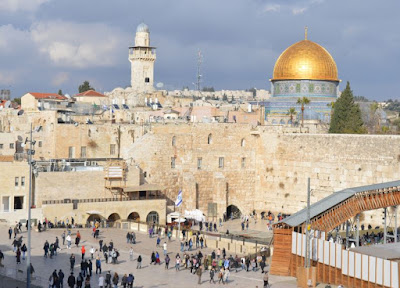 The Middle East. Just uttering the phrase causes some to lament on the conflict and instability that has tormented the region throughout history. Others think to the setting of religious stories they've held close throughout their lives. And yet, tens of millions of people call this turbulent area of the world home.

After years of sidestepping the region due to fear, we decided the time was right. With the goal of having a more historical and cultural experience rather than to embark on a religious pilgrimage, we set out to make the most of our short time.

Day 1: Arrival/ Tel Aviv, Israel
In planning our trip and not knowing what to expect, we elected to arrange for an airport transfer service offered through the hotel. Upon arrival into Tel Aviv's Ben Gurion international airport, we were met planeside by an airport employee who immediately whisked us off the tarmac and into a sedan. We were driven directly to the entrance of the border control area and escorted to the front of the line. Within moments of touchdown we were met by our hotel car. It was definitely easier than we anticipated without any heightened security delay. That afternoon we spent relaxing and getting acquainted with the area.

Day 2-3: Petra and Wadi Rum, Jordan
After an early start to the day, we took a bus south to the Eliat crossing near the Red Sea. We were able to obtain a visa at the border and met a Jordanian guide on the other side. For the next two days we explored the lost city of Petra, camped in the desert under the stars and ran with the Bedouins along the dunes in Wadi Rum. Currently Jordan is one of the safest Arab nations in the Middle East. Not only was it exciting to experience the culture and see the country's most well-known treasures, but it was the perfect timing to escape Israel while the country was observing Shabbat.

Day 6: Masada and the Dead Sea, Israel
On our sixth day we decided to get out of the city and see the surrounding area. Two of the top tourist attractions in Israel are the hilltop fortress of Masada and the Dead Sea. We spent the morning walking the ruins and had lunch at a traditional Jewish kibbutz, or communal settlement. We walked off our meal in the desert oasis of Ein Gedi where according to biblical story King David hid from King Saul and wrote the majority of the Book of Psalms. After hiking through the waterfalls, we stopped off at a beach resort to spend a few hours floating in the Dead Sea and covering our faces in silky gray mud.

Day 7: Bethlehem, Palestine/ Jerusalem, Israel
With help from an Israeli friend, that morning we ventured into Palestinian territory. On the other side of the wall was the Church of the Nativity which is believed to be built over the birthplace of Jesus Christ. While in Bethlehem our Christian Palestinian guide shared with us the difficulties of being a Christian in a Muslim-led and majority country. In the afternoon we returned to Jerusalem to see some of the sights outside of the Old City including the Mount of Olives.

Day 8-10: Cyprus/ Turkish Republic of Northern Cyprus
After a fast-paced week spent seeing as much as we could of Israel and the surrounding lands, it was time to relax. We hopped a short flight to the island of Cyprus in the Mediterranean. During our stay at a Limassol beach resort we were able to visit the birthplace and temple of the Greek Goddess Aphrodite, witness the locals celebrate Epiphany Day and even mustered the courage to venture into the area of the island occupied by the Turkish Army.

Our visit to the Middle East was unforgettable. In ten days I learned more about western religion than I had over the course of my life. During our many adventures, there were moments when we were fearful and times when we were humbled, but we came away from the experience with a greater appreciation for the region's rich history and culture, and a hope that somehow its people can find enduring peace.