After tossing a few coins to a man slumped in a plastic chair to watch our rental car, we set out to cross the de facto border into the Turkish Republic of Northern Cyprus. It was a bit intimidating to march into a self-declared state occupied by 30,000 Turkish troops, but we elected to test our luck anyway. 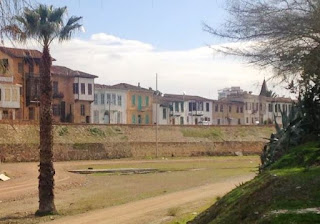 The first step was to exit the Republic of Cyprus. We walked up to a small white building and handed over our passports. After being questioned about our purpose and length of stay, the officials waved us on without a stamp or any documentation.

Passing billboards displaying the faces of the young men killed in protests during 1996 and flyers cautioning us of the dangers of the Turkish occupation, we entered the United Nations buffer zone.

Also referred to as the "Green Line" dividing the island, the UN buffer zone is a narrow stretch of land which contains seven de facto border crossings. We chose to enter at the Ledra Palace crossing which is only accessible to the public by foot and not long ago was reserved for government and military officials. The crossing bears the name of the impressive multi-story building which was once one of the most luxurious hotels on the island, but is now the region's UN headquarters and a popular meeting site for peace negotiations.

Days earlier we had flown into the city of Larnaca, Cyprus. Having the desire to visit the TRNC but not knowing much more than that the island is plagued with what the world refers to as the "Cyprus Problem," we decided to do some research. We learned that although the island struggled throughout much of its storied past, the current-day issues began when Cyprus gained its independence from the United Kingdom in 1960. During that time, and still to this day, the island was home to two distinct cultural groups: the Greek Cypriots supported by Greece and a minority of Turkish Cypriots backed by the government of Turkey. 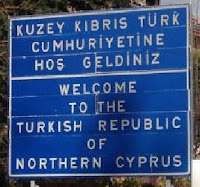 In 1963 the island and city of Nicosia, or Leftkosia in Turkish, was physically divided by a wall, barbed wire or fence along the Green Line. Tensions soared in 1974 after the Turkish army captured one third of the island in the north, and later in 1983 the Turkish-held area declared itself the independent state of the "Turkish Republic of Northern Cyprus."

Discussions around resolving the Cyprus Problem have been held frequently throughout the past thirty years without much progress. Most recently talks were organized in January of 2017 in Geneva, Switzerland to discuss the issue but it appears the parties remain at a stalemate due to several key issues. As of today only Turkey recognizes the Turkish Republic of Northern Cyprus as a nation; the United Nations and all other governments regard the Republic of Cyprus as having official governance over the entire island. 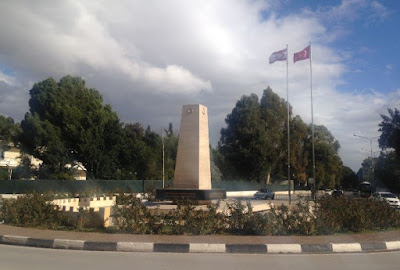 As we exited the UN buffer zone and walked into the TRNC side of the last divided capital in the world, we were struck by the change. The thriving, modern city "Nicosia" which we left moments earlier was a stark contrast to the dilapidated, scarcely-populated section of "Lefkosia."

On the other side of the tall cement wall, packs of men meandered aimlessly on broken sidewalks and past abandoned houses. Small stores were signed with Turkish lettering and kebab restaurants sat empty. Other than the official sign at the border, the only other acknowledgement that we were in the occupied area sat across from a closed pizza joint within a traffic rotary: a stone monument flanked with both the Turkish and TRNC flags.

After a brief stay we walked back to the crossing past the armed border guards; this time they couldn't be bothered to check our documents. Life varied considerably from one side of the wall to the other with the tension all around palpable.
Posted by Kimberly Leupo