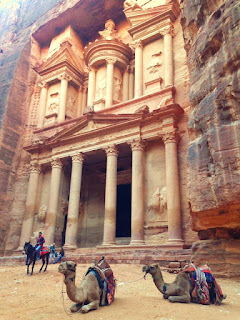 From the glowing red sands and towering rocks, to its bustling cities and trendy beach resorts, Jordan is a hidden gem nestled in the turbulent Middle East. During our two-day excursion to the Arabic country, we explored the lost city of Petra and ran with the Bedouins along the dunes of Wadi Rum.

Often referred to as the "Red Rose City Half as Old as Time," Petra, Jordan is an ancient city carved entirely from rock. The city was built between 800 B.C. and 100 A.D. by Nabatean Arabs as a virtually-inaccessible fortress. Centuries later after the Romans rose to power, Petra became a famed stop on the Silk Road and amassed great wealth. After the sea trade slowly displaced caravan routes, the city's importance began to diminish and eventually it became lost to the world until a Swiss explorer re-discovered it in 1812.

Today Petra is Jordan's most-visited tourist attraction and a UNESCO World Heritage Site, along with being listed as one of the New 7 Wonders of the World next to the Great Wall of China and Taj Mahal.

The city covers an area of about 100 square kilometers and contains more than 800 monuments. Its most iconic structure is the Khazneh, or Treasury building, but there are a number of other well-preserved structures to explore. Dodging the donkeys and carriages as they speed through the city's narrow passages, it's easy to see why Petra has been featured in several blockbuster films including Indiana Jones and the Last Crusade. 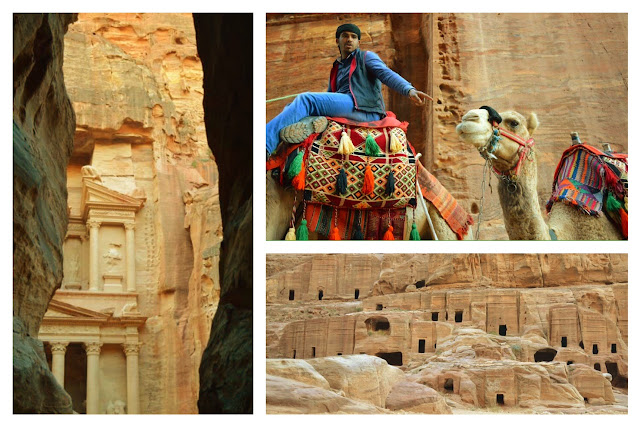 Not far from Petra in southern Jordan is the valley of Wadi Rum. Also known as the Valley of the Moon, Wadi Rum is a vast desert formed of sandstone and granite rock. The area's almost supernatural landscape has invited a host of films to use it as a backdrop including: Rogue One: A Star Wars Story, The Martian, Transformers: Revenge of the Fallen, and Lawrence of a Arabia to name a few. Bedouin families call this area of the world home and welcome visitors to share in the secrets of the desert.

The Hashemite Kingdom of Jordan is strategically located at the crossroads of Europe, Asia and Africa. And with its historical and architectural treasures, and unique arid landscape, it's well worth a visit during your trip to the Middle East.