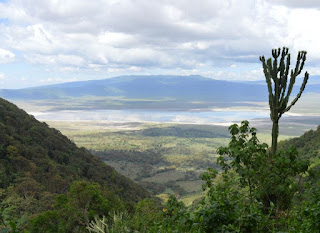 Our last day on safari we headed down into the world-famous Ngorongoro Crater. Ngorongoro was given its name by the Maasai Tribe which translates to "gift of life" in the local tongue and is intended to be the phonic rendering of the sound of a cowbell. Inside the crater, it is common to see young Masaai boys herding their cows interspersed with zebras and other animals.

Ngorongoro Crater is the namesake, as well as a protected UNESCO World Heritage Site, within the 3,000 square mile Ngorongoro Conservation Area. The crater, which is technically a large volcanic caldera, was formed after the collapse of a mountain larger than Mount Kilimanjaro more than two million years ago.

Life inside the crater is abundant with greater than 25,000 large animals roaming within its walls. Gazelles, giraffe and zebras graze side by side on the lush green grasses. Lions are the primary predators reigning over the area with buffalo, elephants and black rhinos also commanding attention. Hippos, which are the most dangerous animals to humans due to their size and territorial nature, are found in many of the crater's watering holes and swamplands.

While driving the trails within the crater we noticed some activity on one of the grassy hills. Upon further look there were several animals and a bit of commotion. It appeared that a lion pride had killed a buffalo recently and was attempting to protect their meal from scavengers. Four lions were battling more than a dozen spotted hyenas and a couple stray jackals. The other lions took turns chasing the hyenas away, but every once and again, the group of hyenas would succeed at distracting a lion and capturing a piece of meat or skin. Another lion sat perched on the hill surveying the scene.

Ngorongoro Crater is a majestic land where animals of all shapes and sizes live openly together and enjoy the lush environment. With its ample supply of grasses, trees and water, the crater serves as a protected oasis and is an ideal viewing place to see wild animals in their natural habitat. 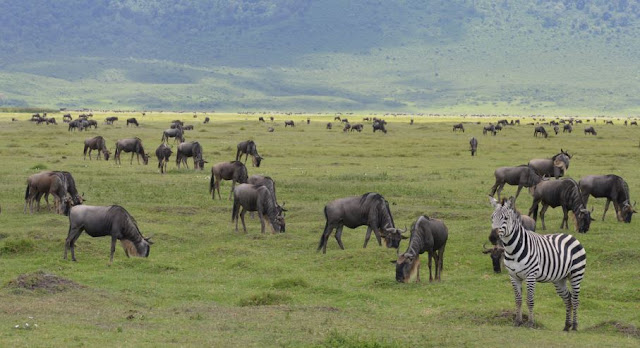