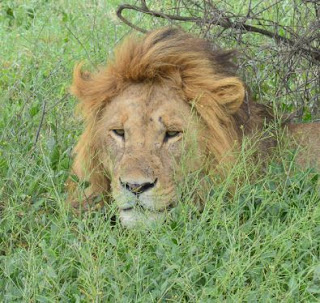 The second and third day of our safari we ventured into the Serengeti. The Serengeti is Tanzania's oldest and most popular national park named by the Maasai people meaning "endless plain." The national park covers 5,700 square miles stretching west to Lake Victoria and bumping up against Kenya in the north.

Wildebeest Migration. We were fortunate to witness the annual wildebeest migration during our visit; from December through July, more than six million animals roam the open plains in search of fresh grazing. Swaths of land turn from golden to dark brown as the animals dot the landscape and stretch as far as the eye can see. Driven by instinct millions of wildebeest trek north during this period accompanied by hundreds of thousands of zebra and gazelle.

During their pilgrimage, many wildebeest calves are born; we learned that it takes the babies one minute to walk, three minutes to run and ten minutes to run faster than their mothers. Survival of the fittest is definitely in play in the Serengeti.

Wildlife. Aside from the massive herds of animals engaged in the migration, we saw elephants, giraffes, ostriches, secretary birds, eland, topi, impala, a serval cat, a bush cat, spotted hyenas, golden jackals, antelope, Egyptian geese, guinea, black face velvet monkeys and enormous stampedes of buffalo. We also were able to spot a spitting cobra slithering across the road and an agama lizard perched on a rock.

Lions. To our surprise, lions were easily spotted roaming the park grounds and finding shade under the larger acacia trees. We admired a large golden-maned male lion prowling the tall grasses in search of prey as well as a pride of female lions with their cubs frolicking near a lake. Male lions grow light brown or blond manes around age 12 which darken and turn black around age 19. Lions prefer wart hog, zebra and buffalo meat but will not be selective when really hungry. During an afternoon game drive, we saw the aftermath of a lion pride ravaging the remains of a young elephant. Depending on the size of the kill, lions will eat for three to four days off of one animal and then can go another four days without eating before getting angry.

Leopards. Leopards are nocturnal predators who hunt at night and rest in the sprawling acacia trees during the day. Elusive and solitary, like many of the fast cats they are hard to spot during safari. As we were driving through the grasslands, our safari guide abruptly turned off the jeep and grabbed his binoculars. He signaled for us to look to a far off tree where we saw a large leopard perched in a tree trunk. We admired the beautiful animal for nearly an hour stealing close-up shots with our camera. We then watched as the leopard climbed down the tree, leaped into the grass and started walking toward us. We couldn't have been more excited when it crossed the dirt trail right in front of our jeep, and we were able to get a closer look at its magnificent spots.

Cheetahs. Another hard-to-spot cat, is the cheetah. After two days of cruising the Serengeti plains, covered in orange dust, just as we were able to leave the park our guide stopped the jeep once again. This time to point out three black spots in the distant grasses. With binoculars in hand we were able to see three cheetahs looming in the grass about to pounce on a small herd of antelope.