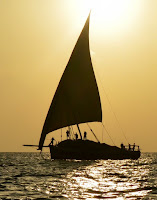 The islands sit about 30 miles off the coast of mainland Tanzania and are easy to reach by a short flight or a two-hour ferry from the country's largest city of Dar es Salaam. We chose the ferry route, and upon docking on the island of Unguja were greeted by hoards of locals grabbing at our luggage and touting taxis, hotels and tours.

Welcome to Zanzibar! Amid the confusion we jumped into a cab and quickly befriended the driver. During our five-minute drive to the hotel, he schooled us on the islands' offerings and volunteered to arrange our excursions for the next several days in which we happily agreed.

The DoubleTree Hilton in Stone Town served as our oasis on the crowded, hot island, where the highlights from our visit included: