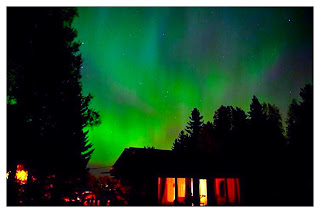 Every once in a while, you may just look out your window and up at the sky and see something truly awe-inspiring.

While it is extremely rare to see the Northern Lights from where we live, it is more common farther north. The phenomenon is a result of a solar wind disruption in the magnetosphere causing particle ionization to emit light. While the lights we observed last week were predominantly green with traces of purple, light bands and clouds can also illuminate the skies with yellows, blues and pinks.