Munich, Germany: The Mysterious Life (and Death) of a Bavarian King - September 2015 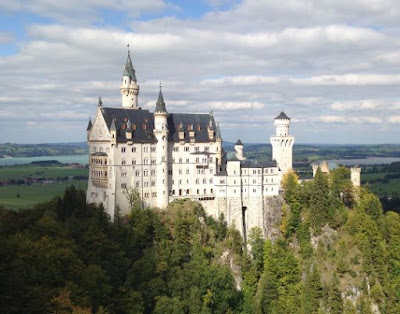 King Ludwig II of Bavaria was a handsome man with dark brown hair and smoldering brown eyes. He stood at 6' 3'' and had a deep voice that would cause chill bumps to dance up your spine.

He took to the throne at the young age of 18 ruling over the Bavarian region of Germany. The King was not much for politics or social functions, and so let his ministers tend to government affairs in Munich while he stayed in the countryside.

Captivated with art, music and architecture, the King frequently visited France in search of inspiration. When he wasn't immersed in the French culture, he would socialize with the local Bavarian farmers and laborers and bring them gifts from his travels. He became known as the Fantasy King and was celebrated for his eccentricity.

As a young man, one of the King's first projects was building his very own castle on a plot of land nearby his family home. Neuschwanstein Castle is a Romanesque Revival palace perched grandly on the hillside above the village of Hohenschwangau. The King began building this castle in 1869 as a tribute to the German composer Richard Wagner. Neuschwanstein would later be the inspiration for Disneyland's sleeping beauty castle.

In addition to Neuschwanstein, the King spent his royal funds on the creation of two other lavish palaces Linderhof and Herrenchiemsee. As the years passed, the King devoted more and more of his time to his projects. The reclusive King would seldom leave the castles and his peculiar behavior was beginning to trouble his ministers. Advisers encouraged him to marry, and while he entered into a long engagement with his cousin, Duchess Sophie Charlotte, the two never wed. He slept all day and listened to music all night. Rumors swirled of the King using state monies to fund his palaces. He failed to attend high-profile government events and cancelled important appointments.

Growing increasing intolerant of the King's unpredictable behavior, the ministers commissioned a group of doctors to assess His Majesty's mental state. Never having met the King, the collection of doctors including one Dr. Gudden, declared the King insane.

Soon after the formal declaration, a number of the King's privileges and responsibilities were redistributed. Fearing for his life, the King's friends urged him to flee Germany.

At 40 years old, the mysterious and intriguing life of King Ludwig II was cut short. On June 13, 1886 at 6:30 p.m., following a heated dinner with several government officials and doctors at his castle, the King sought out on a walk near Lake Starnberg with Dr. Gudden. Hours later when the two hadn't returned, a search ensued. At 10:30 p.m. the bodies of both men were found in shallow waters. The King's watch had stopped at precisely 6:54 p.m. The coroner's report officially declared the King's death a suicide but no water was found in his lungs.

To this day, King Ludwig II is remembered as one of the most popular kings in all of Germany and referred to by those in Bavaria as "Unser Kini" or "Our Cherished King." Ironically his three unfinished castles are some of the most popular tourist attractions in Germany yielding substantial profits for the Government of Bavaria.
Posted by Kimberly Leupo