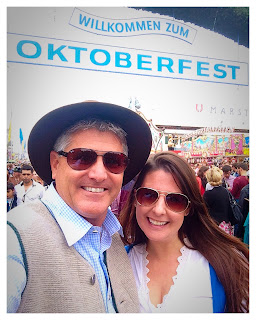 Most events centered around beer don't require a whole lot of thought or planning, but for the world-renowned drinking festival in Germany each year, a bit of wisdom can go a long way. For instance did you know that the majority of Oktoberfest actually takes place in September? Or that while Munich hosts the largest party each year, Oktoberfest is celebrated in nearly every German city and many places outside of the country?

Traditional Attire. While it certainly isn't mandatory, dressing up in traditional German outfits for the festivities can enhance your experience. For men that means lederhosen which are short or knee-length leather pants most often accompanied with knee-high socks, suspenders, checkered, button-up shirt, woolen sweater or overcoat, and most always a wool hat. For women, the apparel of choice is a dirndl which is comprised of a full skirt with bodice, a white blouse and an apron. You can easily find these accessories at department stores and shops throughout Germany, but be aware that authentic high-quality traditional German outfits can set you back a pretty penny - upwards of 400-600 Euro. A more sensible option is to seek out clothing at second-hand stores or from shops catering to tourists. Insider tip: it is also possible to rent your Oktoberfest apparel in many of the larger cities in Germany.

Admission Fees. In Munich as with many other cities in Germany, there are no entrance fees into the festival. Once within the arches of the festival, beer tents and vendor carts line the walkways. Munich's Oktoberfest is the world's largest fair attracting nearly 6 million visitors annually.

Beer. Surprisingly, you can't grab a brew and walk through Munich's festival. Beer is best drunk in tents and gardens. According to the Munich Oktoberfest website, at this year's festival 7.7 million liters of beer were consumed, and tent security confiscated beer mugs from 110,000 drunken patrons attempting to stumble home with a souvenir. Depending on the tent, you may also need to be seated at a table or have ordered food to imbibe. Insider tip: stealing glass beer mugs from the beer tents is a no-no. If caught, your fate is in the hands of security and you very well may end up in a German jail.

Food. The number of chickens, ducks and bratwurst consumed during Oktoberfest is astonishing. In addition to the vendor carts parked along the walkways hawking pretzels, sweets and hand-held snacks, most beer tents have a full menu. Some tents require a food order to be seated and fries or dessert won't suffice.

Tent Reservations. If you know Oktoberfest will be on your party card for the year ahead, reservations are the best way to go. Some popular tents max out on reservations in December for the year following. Booking with a tour company may also get you a seat at the table in choice party tents. Insider tip: while it's permitted and highly encouraged to dance on the bench seats of most tents, dancing on the tables is a sure-fire way to get a formal escort out.

Restrooms. Several tents have their own restrooms and there are community restrooms in several locations. However, beware that the lines can be painfully long. Plan accordingly. Insider tip: check out the lost and found area of the police station; clean indoor restrooms are right around the corner.

That all being said, with its music, dancing, food, carnival rides ... and of course, the beer, Oktoberfest is one festival not to miss. Mark your calendars for Oktoberfest 2016 which will take place Saturday, September 17 through Sunday, October 2.